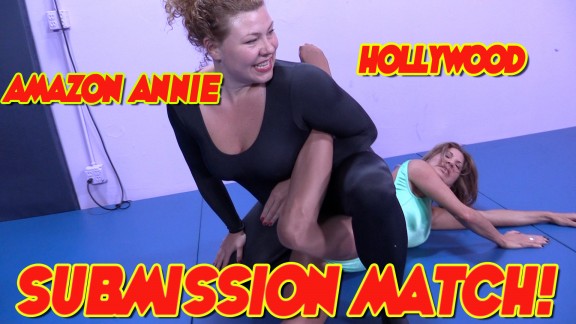 Buy Now!
Add To Cart
Get DVD
$14.99 - 16:00
This is a 6 submission match and Hollywood doesn't win any of them!
Annie brutalizes her body with submission move after submission move. Hollywood cannot defeat the amazon wrestler and she winds up exhausted and defeated at the end!

The girls grapple with Annie getting the upper hand and applies a Boston Crab to Hollywood that is too painful. She eventually taps out but figures the new wrestler just got lucky!
Round 2 and Hollywood again isoutmatched on the mats and eventually finds herself tapping out of a Single Leg Boston Crab! What is going on here? Isn't Hollywood the queen of mean?
Hollywood squares off with Amazon Annie once again and right when she thinks she has the upper hand, Annie powers her through and and catches Hollywood in a Texas Cloverleaf! It's too much! Tap!!
By this point Hollywood has exerted a lot of energy and she is starting to wear down, whereas Annie is still going strong! It doesn't take much for Annie to get Hollywood to submit once again, this time in a Stretch Muffler Hold!

Hollywood is barely hanging on, now, and with time running out, she is losing all hope of winning this match. She's just trying to hang on! Oh, but here comes Annie again with another assault on Hollywoods sexy body! This one ends in a Camel Clutch that all about drains the mighty Hollywood! But Annie also uses leg chokes, scissor holds, hair pulls and bearhugs to weaken her foe before going in for the . And a it is with one more Single Leg Boston Crab to end the match!